A multi-projection installation with sound intended to create a meditative space. One of three projected images is of the Rathod family of India beginning their day, socializing around a fire and preparing their day’s meal – which is accidentally spilled into the fire. To each side of this microcosm of existence, images of what might be stars, wheat, microorganisms or bugs slide constantly into or out of a void. These images are accompanied by the sound of one person constantly exhaling and another inhaling. The totality of the videosonic experience references the constancy of time in all its terminal and eternal nature.

While filming this material I was motivated to start fasting one day a week. In response to this, I asked viewers to take in as much of the two hour and forty six minute installation as they could and to consider taking some action – like fasting – on a schedule of their choosing. In life and art I am interested in exploring the interplay between knowledge and action. 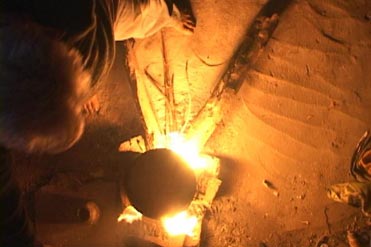 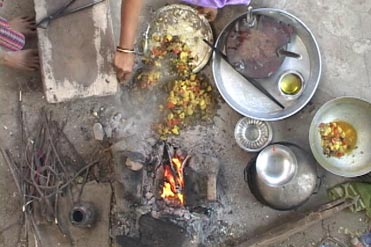 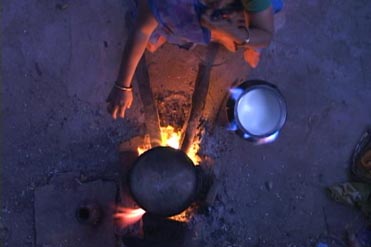 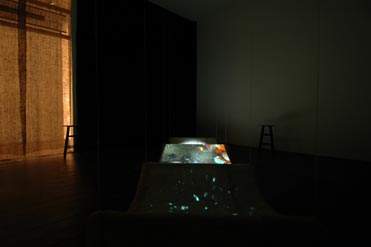 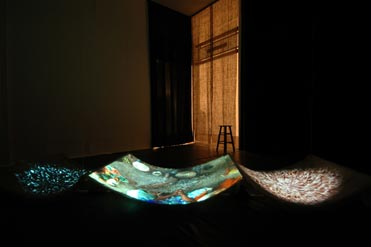 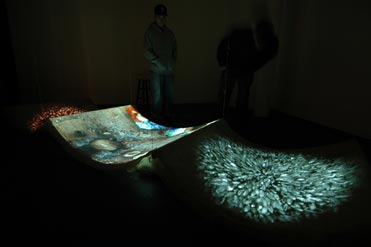 On Summer Street, Michael Sheridan’s brilliant video installations alone merit a visit to the Fort Point Channel. Sheridan’s politics are more constructive than most on display around the neighborhood. His focus is directly on dignity and survival. As such, food takes center stage in this series of videos, projected onto screens of coarse burlap, adding an arresting dimension of texture and smell to the work. Filmed in western India, Sheridan’s hours long film, Feeding the Fire, of a woman preparing the daily meal is projected from above and forms the center piece of a triptych, flanked by spiraling images of grinding grain. For collectors touring the Open Studios, it’s nearly impossible to experience such video installations and not wonder how to display such a demanding art form in one’s own home, but these are questions any serious collector of contemporary art ought to address.