Installed as Distant Views for the 2005 Boston Cyberarts Festival and subsequently as Culture Catchers at the gallery G-A-S-P. Shortwave radios, digital recorders and players, motion detectors, micro computers and antennae were hung by suction-cups on a wall of windows or sheets of plexiglass. The movement of visitors triggers sounds from around the world to fill the environment and to be twisted together. At any one moment one might hear, for example, Persian music, Christian proselytizing and the day’s news in Korean. They are a sequence of non-linear ideas that, with time, leave an impression of the continuous course of life that is speaking from all corners of the globe. 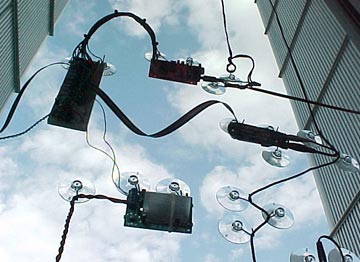 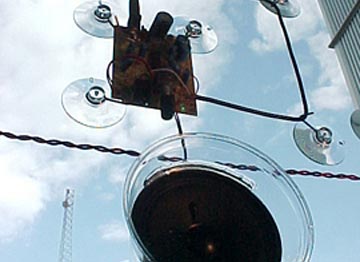 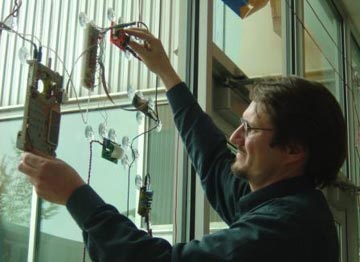 Finally and not lastly, I must mention Michael Sheridan’s Culture Catcher, a giant console of electronic gadgetry that picked up signals from all over the world. The piece was sensitive to its own environment in that it picked up on the motion of people in the gallery which (among other things) would trigger it to suddenly go off spilling its babble. Culture Catcher is tuned in to more than just radio signals: it’s attuned to major issues around and through which we communicate and live. It speaks of displacement, multiculturalism, interconnectivity as well as fragmentation. For me it was the keynote work of the show, in that it quite literally weaves together information, culture, and technology, but that the tapestry it creates is mutable, changing, unstable, open and receptive.

Excerpt from ArtsEditor
February, 2006
“The Thread Counts Project at GASP”
By Scott Ruescher

…You can hear the whole human world, standing there at Sheridan’s colorfully complicated, transparent wall of electronic gizmos that he uses to pick up “news and cultures of the global community.” If you’re lucky, in the midst of the evocative crackle and scratch of his shortwave radio’s democratic and all-inclusive static, you might be able to snatch, from two tiny speakers, a mind-altered raga from Mumbai, some talk-show babble from Manila, and an exhilarating burst of applause from a soccer game in Managua-all in the space of a few minutes, and each station, each culture, with its own special idiom of metaphors whose poetry, to quote Robert Frost, is, for better and worse, “lost in translation.”