Mixed Blessings was part of a show called “The Fourth Wall” at the Fort Point Gallery in Boston. The installation brought the art viewing experience to the public by activating the wall of windows facing the guests at the Channel Café Restaurant. Diners watched a video collage of vegetables being prepared for serving. In a seemingly eternal flow across a glowing stainless steel surface, hands and knives clean, chop, slice and mix a variety of vegetables. The experience is mesmerizing in its sensual and, at times, violent nature and causes us to look with fresh eyes at the food that fuels our lives. 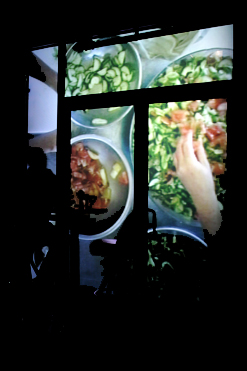 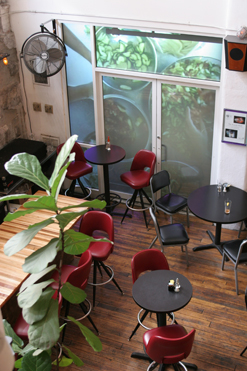 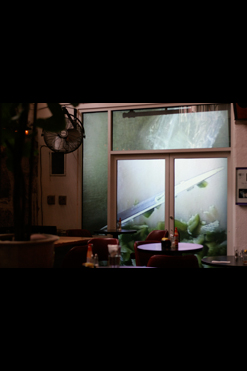 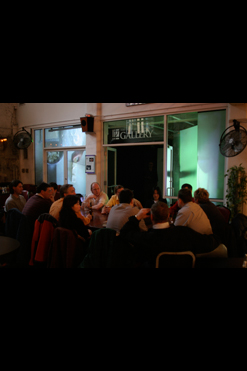 …The nature of video installation is to engage the visitor in a moment of interaction that is like, yet very un-like, the standard mediated dichotomy of viewer and subject. Most video installations fall back upon the standard cinematic environment of the darkened room simply with the notable lack of seating. There is rarely anything “installation-like” about it other that it happens to be “installed” in a gallery. There is no interacting, it is simply watching. It is here that Sheridan and Zimmerman play with the concept of the fourth wall. The FPAC is literally enclosed within a screen. The glass walls of the gallery allow for complimentary viewing between the café and the interior of the gallery. They stand in for Brecht’s metaphorical wall inviting the visitor inside to engage with the art.

The first of Sheridan’s projections fills the left hand windows. Images of vegetables being chopped and placed in bowls move slowly across the panes. The images are shot from above at a medium distance. The hands and knives dance across the windows in symmetry with the café space creating a constant reminder of the relationship between us and the production of our food…. The placement on the windows facing the café worked well. I visited the gallery when the café was closed but I imagine that Sheridan’s videos are quite engaging when surrounded by people eating and drinking.… Sheridan’s videos are beautifully shot, with vibrant colors that emphasize the live-ness of his subject matter: vegetables…. In watching the vegetables being sliced and placed in large bowls I couldn’t help but feel I was engaging in a bit of vegetable voyeurism, watching food pornography; The knife slowly cutting into the flesh of the carrot combined with the sensuous moments of the hands moving and caressing the tomatoes…. Our experiences with food have become removed from their problematic production aspects. We prefer our food to be packaged and easy to view.

A unique art exhibit will project its statements on the buildings of Fort Point Channel for the next several weeks.

“The Fourth Wall” – video installations by local artists Michael Sheridan and Andy Zimmermann will have its opening reception on Friday and will run through March 2.

Sponsored by Fort Point Artists Community Gallery, both artists activate the “fourth wall,” the plane between the stage and the audience, by projecting imagery onto the wall of all windows facing the Channel Café Restaurant at 300 Summer St.

Sheridan’s installations are constructed from video of vegetables being sliced and diced, bread dough being mixed and rows of plates being filled with food. The process, as rendered with projections onto windows and rice, is meant to convey a variety of emotional responses, ranging from sensuality to violence.

Zimmermann’s installation, “Seven Songs” is a sequence of videos projected onto a sculptural arrangement of translucent panels. The projected images are broken into fragments as they land on the panels, which are spaced apart and angled to one another. The result is an abstraction of every day items. Complimenting the piece will be music randomly generated by a computer.

Along with “The Fourth Wall,” Sheridan and Zimmermann are each creating an installation on the street-level windows adjacent to the gallery entrance at 300 Summer St.

Using translucent materials and video projections, these installations will be especially visible at night.

Sheridan lives in Jamaica Plain and has a studio in the Fort Point Channel. He has exhibited at the Isabella Stewart Gardner Museum and the Axiom Gallery.

Aside from the installation Sheridan is currently unveiling, his artistic energies have focused primarily on documentary film.

Throughout his career, Sheridan has traveled the globe for his films and artwork. In particular, he has focused on the eastern coast of Africa, and such countries as Ethiopia, Mozambique and Tanzania. He has also toured South Asian nations, such as Pakistan and Bangladesh.

“My work is geared towards hunger and poverty issues,” Sheridan said. “My artwork is really trying to respond to these issues. This show is all about food and about consumption. It’s about the tipping point between sustainable and unsustainable consumption.”

To allow the images to project properly, an extra layer of frosted Plexiglas was added to the restaurant and café’s windows. Additional pieces were installed inside the gallery, including a piece that projects a pool of rice across a section of the floor.

Sheridan considers himself fortunate to have studio space and an installation in the historic Fort Point Channel District. He fears however, that when his current two-year lease expires, development in the area will have driven many artists out.

“It really is evaporating,” he said.

In the meantime, however, he is looking forward to challenging visitors who either visit the gallery or stumble across its glowing exterior.